With not much time in this small, but somewhat quaint city, we dropped our bags at the hotel, grabbed a bite to eat and headed out. We made our way over the canal (stop for photo op) and straight to the market. This was a rather crowded market street, but it housed some of the most interesting and unique shops we had seen yet in China. 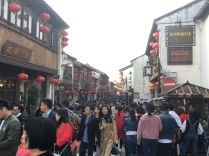 One habit the Chinese have, that to be honest, I could have done without, is to take photos of people without asking first. As a tourist on my last trip through India, I got used to having my photo taken. It didn’t bother me because people would ask first and always got in the picture with me. In China, it was either like being a caged animal in the zoo, surrounded by paparazzi or being stalked by creepy men. We had learned that if you take a photo of them in return, they will usually back off.

In Suzhou is where I met my match. Yang Yang gave us about an hour to browse the shops, so off we went, breaking off into sub-groups and making our way down the market street. Myself and about four or five other people stuck together and it didn’t take long for Mario to point out that we seemed to have a stalker. Having just bought a selfie stick about three minutes earlier, I promptly went about the regular procedure, attempting to shake him off by taking a photo with him.

It didn’t work. He continued to follow us and take our photos. This went on for probably twenty minutes until Pip and I spotted a very cool looking shop and popped inside, along with the others. Without fail, our stalker was coincidentally also in the market for some handmade souvenirs. His behavior was really starting to bother me. Trying to sift through all the cool merchandise and ignore the creepy man snapping our photos was taking its toll. At one point I stopped to check out some key-chains depicting the different animals of the Chinese zodiac, when I looked up and to my right, directly into our stalkers cell phone camera.

With my best “I am fed up and not kidding around” face, I pointed my index finger towards his face and yelled, “Stop taking my picture! Stop taking all of our pictures! Stop! Go away!”

Looking a bit taken aback, the stalker turned his back to me, messed around on his phone a bit (perhaps believing that I didn’t see him email my photo away) and left the store. Thus began my fed-up’edness of being photographed in China…except with my own selfie stick!

Thankfully we had an exciting supper planned in Suzhou. After reconvening with the group at Starbucks and messing around even more with my new selfie stick (seriously, I don’t know why I put this off for so long. I fought so hard to not buy one of these, but it’s so worth it!), it was time to eat.

The hot pot in Suzhou is HOT! Both in the spicy and electrical sense of the word.

For those of you who are a bit ignorant to what exactly is Hot Pot (I wasn’t quite sure either before I got to China), it’s basically a boiling pot of broth in the middle of the table. You are served thinly sliced pieces of vegetables, meat and tofu, which you then put into the pot to cook. You can either dump the whole lot in if it’s something that takes longer to cook (like meatballs), or if it’s a quick cooking item, simply hold it down in the boiling broth for a minute using your chopsticks. Well, we had a large assortment of meats and veggies. What we didn’t have…was plastic. 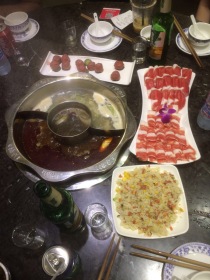 Near the end of our meal, I turned to Pip and said, “I smell burning plastic”. To which she agreed. We poked our heads under the table, where the element for the pot was plugged in and the smell was indeed much stronger down there. We called to Yang Yang (she was at the other table with the second half of our group), because she would obviously be the one to communicate with the restaurant staff as to what is happening. Someone came and had a look and deemed it a non-emergency, so we went back to eating. Pip and I could still smell plastic. Again we poked our heads underneath the table and faster than I can even remember, we had both pushed our chairs away from the table and yelped! Okay fine, I swore, but Pip is a proper lady and handled herself much more graciously. Smoke was coming out of the plug in the floor!

Now the element has been shut off and unplugged. Fortunately we were done eating and as a thank you, we were given dessert on the house. I can’t remember what the dessert was, because as I mentioned in an earlier post, it’s not something the Chinese do very well. Grateful nonetheless.

To finish the night off, we ended in true China style. PRIVATE KARAOKE! 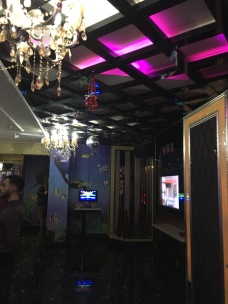 The rest of us happily struggled our way through Adele, Britney Spears, TLC, Cher, Dr. Dre and Snoop Dogg, Eminem…the list goes on. Some advice to future karaoke’ists: Gangnam Style, while super fun, is not a good choice for karaoke as it is Korean and there is no English version. All in all, an eventful day in Suzhou

Oh yeah, and we met this awesome dog.

One reply to “Suzhou Stalkers and Extra Hot Hot Pot”